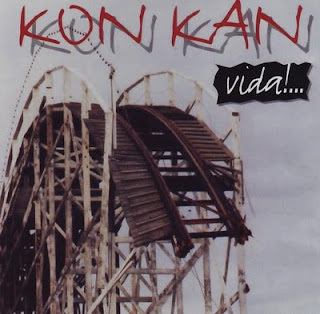 "I feel good, I feel right.   I feel that I'm on an illegal high."  Kon Kan were an electronic duo that released their debut, Move to Move, in 1989.  They had a number of well known Canadian hits from that album like the song, Harry Houdini.  However, the lead off single, I Beg Your Pardon, was an international hit charting in the US and Canada in the Top 40 and in the UK and Germany in the Top 10.  The band would release two more albums before calling it quits in 1993.  Vida! was their final album and it produced the catchy dance track, Sinful Wishes.  For myself, when I look back on some of the great electronic tracks of the eighties and nineties like Move Any Mountain (Shamen), What's On Your Mind (Information Society), Bizarre Love Triangle (New Order), Kon Kan's songs are right up there.  There aren't many Canadian dance/pop artists that have achieved the level of success that they did, yet sadly, less has been written about them.  Barry Harris, the principle founder, would go on to work as part of a DJ remix duo known as Thunderpuss and remix tracks for a number of artists like Britney Spears, Whitney Houston and Christina Aguilera.  The Kon Kan discography is a lost treasure today.  Only their remixed first hit, I Beg Your Pardon, has been re-released.  At the time of this blog, there were 3 copies of Vida! for sale on Amazon and Discogs for $125!  You can watch the video for the song, Sinful Wishes, on You Tube (http://www.youtube.com/watch?v=Y5m61QJdTQs).  Thanks for reading and enjoy!
Posted by Raised On Canadian Radio at 11:05 AM