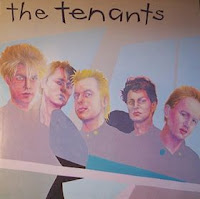 "Sheriff came around today.  Said I'd have to go away.  It's not you or your type.  I wonder where I'll sleep tonight."  The Tenants were a band from Scarborough who cut their self-titled debut album in 1983.  They had an instant hit on their hands with, Sheriff, a song about foreclosure and tenant rights or lack thereof.  As most have commented in the past, this song bears a strong resemblance to the sound of the Police.  Mainly because of it's reggae style.  The band was signed to CBS records and would release another album the following year.  However, their management company which was based in Australia, took CBS's cash from the recording budget and left the band high and dry.  Coincidentally, they were managing another band back home in Australia called, Men At Work.  Accountable for the funds, the band eventually broke up.  This isn't the easiest record to find.  Amazon.com was selling a vinyl copy for $8 and a 45 of the song Sheriff for $6.  There were also vinyl copies on Ebay selling between $4 and $8 at the time of this blog.  You can watch the video for the song on You Tube (http://www.youtube.com/watch?v=yQ1QmAvDtkE).  Thanks for reading and enjoy!
Posted by Raised On Canadian Radio at 6:29 PM No comments: