Artist: Bill Amesbury, Album: Can You Feel It?, Song: I Remember

Can You Feel It 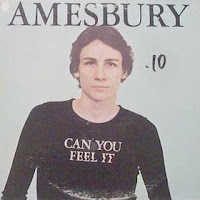 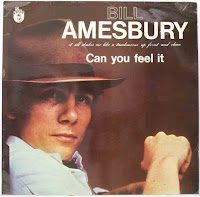 "And I remember the bands an' the one night stands.  Making love in the back of a Chevy van.  And I remember the nights in the Holiday Inns.  Four to a bed and stinking of gin.  I remember the road it was so damn cold.  With the feeling of bein' bought and sold.  I remember.  I remember the road."
Bill Amesbury's, "Can You Feel It", was released in 1976.  He was already known to most Canadians thanks to the success of his debut release, "Jus'a Taste Of The Kid" and the Top 10 song it spawned, Virginia (Touch Me Like You Do) in 1974.  "Can You Feel It" had some minor hits including the track I have selected, I Remember.  He also received some success in the UK with this release and it likely also explains the two different album covers as well.  A friend of mine who I had met while living in Calgary had put this song on a mixed cd for my drive back to Ontario.  I have fond memories of listening to this song as I travelled back to Ontario.  I was able to find a copy on ebay years later.  The record is very difficult to find and unfortunately his Top 10 hit Virginia is the only track ever included in Canadian Music retrospective releases.  At the time of this blog, there were copies for sale on Discogs, Music Stack and Ebay ranging from $10 -$100+.  Thanks for reading and enjoy!
Posted by Raised On Canadian Radio at 12:53 PM No comments: