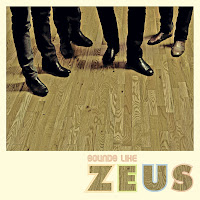 "I could say day, you'd say night.  Tell me it's black when I know that it's white.  It's always the same, it's just a shame, that's all."  Written and recorded by Phil Collins and Genesis in the early eighties and turned into a dirty little rock song by these boys from Toronto.  Zeus are Mike O'Brien, Carlin Nicholson, Neil Quin and Rob Drake.  They started out as a backing band for singer/songwriter, Jason Collett.  They released this debut in 2009 and recently released their second album, Say Us, early this year.  The most recent release is with the Arts and Crafts label that handles Broken Social Scene, Jason Collett and a number of other great artists.  They also played SXSW this year and will be supporting British artist, Jamie Lidell, this fall on tour.  You can keep tabs on the band at http://www.themusicofzeus.com.  The album is available for sale at Amazon.com and you can download it from Itunes.  You can hear the track on You Tube (http://www.youtube.com/watch?v=a96UbWnEQLI).  Thanks for reading and enjoy!
Posted by Raised On Canadian Radio at 5:13 PM No comments: