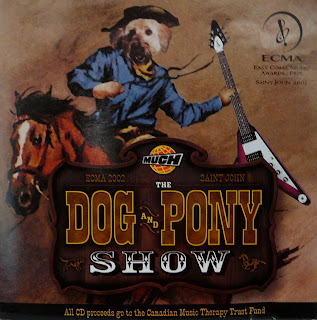 "Don't try to justify your racism.  Don't try to justify your class ism.  Don't try to hide behind your money, man.  Because you're just another species of monkey man." King Konqueror were a ska band from Halifax, Nova Scotia.  They started out in 1999 and produced an amazing 19 indie releases and built a reputation within the city, as one of the most entertaining live acts around.  They played festivals all across Canada and even opened for David Wakeling (English Beat).  In 2001, they released their EP, Smash Hits!!! which included this great floor stomper, Monkey Business.  One of the finest ska tunes to come out of this country.  It was also included on a ECMA music sampler released by Much Music in 2002 called, The Dog & Pony Show.  Unfortunately, there isn't much information on the band that can be accessed and their discography is likely long out of print.  At the time of this blog, I couldn't find any copies of their EP, Smash Hits!!! or the ECMA compilation available for sale.  You can hear the song, Monkey Business, on You Tube (http://www.youtube.com/watch?v=9w5XVAc5EPo).  Thanks for reading and enjoy!
Posted by Raised On Canadian Radio at 12:37 PM No comments: