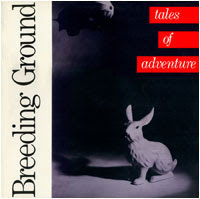 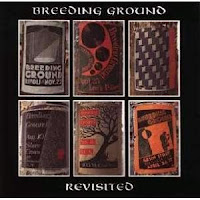 "I used to listen to Zeppelin and Sabbath.  Then I played these guys backwards and heard some pretty weird sounds."  The classic intro to the video for, Happy Now I Know, by Breeding Ground.  Breeding Ground were a Toronto band that formed in 1981 and made their name on the club circuit as a great live act.  By the time they released, Tales of Adventure, in 1986, they had already opened for the likes of the Stranglers, Echo and the Bunnymen and Bauhaus.  Happy Now I Know was a standout on this release and achieved some regular video play on Much Music.  Although this particular track was rather upbeat, the vocal styling of John Shirreff gave the music a certain darkness.  They definitely had a unique sound for the time.  This particular song was aided by a young Molly Johnson on vocals.  She would further her own musical career in the years that followed as a member of Alta Moda, the Infidels as well as a solo artist.  The band took a 3 year hiatus and came back in 1989 with their final release.  This particular track can also be found on a retrospective of the band entitled, Revisited, which was released in 1994.  Both Tales of Adventure and Revisited are difficult to track down.  At the time of this blog, there was one vinyl copy of Tales of Adventure available on Ebay for $40 and Cd copies of Revisited on Ebay and Amazon between $10 and $30.  You can watch the video for the song, Happy Now I Know, on You Tube ( ﻿http://www.youtube.com/watch?v=7jnsU1hx530).  As always, you can hear this song and others that I blog about each day on Live 365 (www.live365.com/stations/raisedoncndnradio).  Thanks for reading and enjoy!
Posted by Raised On Canadian Radio at 6:18 PM No comments: