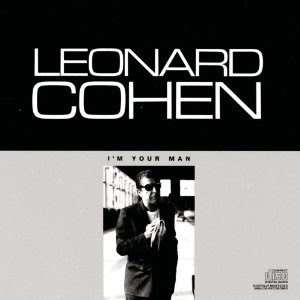 "So you can stick your little pins in that voodoo doll.  I'm very sorry, baby, doesnt look like me at all.  I'm standing by the window where the light is strong.  Ah, they don't let a woman kill you, not in the tower of song."  This beautiful song was included on Leonard's 1988 release, I'm Your Man.  Probably one of his most celebrated releases to date.  The album had a number of well known songs which spawned many cover versions over the years.  In 2005, a film with the same title was released about the life and times of Leonard and included concert footage from a tribute show at the Sydney Opera House.  The soundtrack and DVD included two versions of this song.  One by Martha Wainwright and another with Leonard and U2.  I couldn't adequately describe Leonard or his work in a blog so I won't attempt to.  I love this particular track for it's quiet power and unapologetic lyrics.  An aging performer having bittersweet reflection on his life in music.  Leonard will be turning 76 this year and is still touring.  You can follow him at http://www.leonardcohen.com/.  The album is available on Itunes and Amazon.  You can listen to Tower Of Song on You Tube (http://www.youtube.com/watch?v=oiAuXRK3Ogk&feature=related).  Thanks for reading and enjoy!
Posted by Raised On Canadian Radio at 6:31 PM No comments: