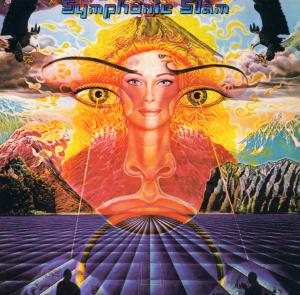 "All the days I spend with you and all you want to do is boogaloo."  Symphonic Slam were a progressive rock band that released their self titled debut in 1976 with A&M records.  They were Timo Laine, John Lowry and David Stone.  They recorded the album in Toronto and toured with the likes of Rush, the Rolling Stones and the Village People.  Timo Laine was born in Finland and the principle member of the band that still carries forward the band name today.  The big thing about Timo was that he pioneered the first guitar synthesizer.  He had six different synthesizers hooked up to his Les Paul guitar so that every string had it's own unique instrument.  He called it the 360 Polyphonic Guitar Synthesizer.  The instrument made some pretty cool sounds and gave this particular track, I Won't Cry, a little extra funk in the trunk.  The band's label really wanted a sound that was more in line with the popular disco genre at the time which they weren't in agreement with.  Keyboardist, David Stone, would leave the band as a result and join Rainbow (Ritchie Blackmore).  After a long absence from music, Timo is back releasing music under his own name as well as Symphonic Slam.  In March 2011, he intends to release a Symphonic Slam II.  You can read about Timo at http://timolainemusic.com/home.html.  The debut album is available from his website as well as Itunes and CD Baby.  You can hear the song, I Won't Cry, on You Tube (http://www.youtube.com/watch?v=6aXjIdHrtRU).  As always, you can hear this song as well as others that I blog about each day on Live 365 (http://www.live365.com/stations/raisedoncndnradio).  Thanks for reading and enjoy!

From: Timo
Date: December 14, 2010 1:16:30 AM EST
To: raisedoncanadianradio@gmail.com
Subject: Timo Laine Symphonic Slam
Thanks for playing  SONG OF THE DAY     "DAYS"

Symphonic Slam signed a re-issue agreement with Musea Records last week
SYMPHONIC SLAM SSII WILL BE RELEASED IN MARCH 2011. THE ALBUM HAS
BEEN RE MASTERED AND WIIL COME OUT WORLD WIDE.
PLAYERS ON THE CD ARE
TIMO LAINE
JIMMY HASLIP
LINDA NARDINI
JAN UVENA
NOE CRUZ

SLAM IS IN THE STUDIO RECORDING A NEW ALBUM.
TWO CUTS WILL BE READY FOR A SNEAK PEAK NEXT YEAR.

Posted by Raised On Canadian Radio at 6:55 PM No comments: