Artist: Stonebolt, Album: New Set Of Changes, Song: All By Myself 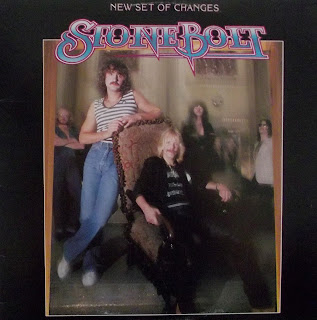 Stonebolt were a rock band from Vancouver, B.C.  They formed under the name Perth Amboy as a 3pc in 1973 and quickly swelled to 5 members.  They were Ray Roper, David Wills, Brian Lousley, John Webster and Dan Atchison.  The band played in Canada and the U.S. before landing a major label deal with RCA.  They released their debut album in 1978 and had an international hit called, I Will Still Love You, that cracked the Billboard Top 30.  They also appeared on American Bandstand.  The group would release three more albums before breaking up in 1983.  New Set Of Changes was their third release in 1980.  It's a good album that perhaps wasn't as commercially successful as their previous releases but had some great tunes.  I actually find Side B to be a bit more uptempo than A and that's where I found this beauty, entitled, All By Myself.  You can check out the song on You Tube (http://www.youtube.com/watch?v=Axu6lzM5EFE).  The band also does a Beatles' cover called, Please Please Me, on this album.  They would reform in the late nineties and release an album of familiar songs and continue to play live from time to time.  The album, New Set Of Changes, is a difficult find today.  At the time of this blog, there were vinyl copies trading on Amazon and Ebay between $10 and $20.  Thanks for reading and enjoy!
Posted by Raised On Canadian Radio at 6:11 PM No comments: