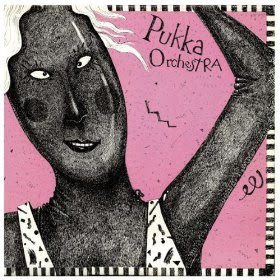 "Sunday morning with the New York Times.  The sun is shining in my penthouse suite.  My lady love laid down some lines.  They reach from Culver Beach to Easy Street."  Pukka Orchestra were a Toronto band that released their self-titled debut album in 1984 on Solid Gold Records.  The lead singer, Graeme Williamson, was actually from Glasgow, Scotland.  Might As Well Be On Mars is a wonderfully sad tale about two people growing apart and the distance in between that they try to ignore.  Aside from being a great rock band, their lyrics were quite sharp.  Another single from this album was Cherry Beach Express which chronicled a story about police brutality involving Toronto's 52 division.  This particular song caused quite a stir when it was released.  Getting back to Might As Well Be On Mars though.  The song was covered by the British band, the Strawbs.  Unfortunately for the Pukka's, their career was cut short after 3 releases in 1992.  Their lead singer fell ill after this release and needed a kidney transplant.  Graeme Williamson is alive and well in Scotland.  Guitarist Neil Chapman continues to write and perform.  You can read up on the band's history and link to other projects at www.pukkaorchestra.com.  Their self titled debut was re-released in 2000 and is available on Itunes and Amazon.  You can watch the video for this song on You Tube ( http://www.youtube.com/watch?v=e5X6-p1ocog).  Thanks for reading and enjoy!

Posted by Raised On Canadian Radio at 8:13 PM No comments: