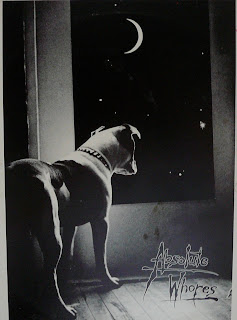 "Cadillac with matching fins."  The Absolute Whores were a Toronto band that surfaced in the mid to late eighties.  They released one self-titled full length in 1989.  The band had a long standing residency at the Isabella Hotel in Toronto, where they would host talent nights for local artists.  The band was very inventive for the time.  They had a newspaper circulating called "The Whore Rag".  They were also known for their high energy Elvis covers and the subsequent smashing of an Elvis bust during their performance.  Their sound was part country, rockabilly, old time rock and roll and blues.  They were Blind Pig Neuton (Vaughn Passmore), Ugly Dick (Greg McConnell), John Paul Trash and Clint Rude.  Greg McConnell actually played with another Toronto band called the Lost Dakotas around the same time.  Vaughn, Greg and John Paul would hook up again in the mid to late nineties as the band, Strato-chief ( See blog 8/9/10).  The self titled debut was a mix of covers (Merle Haggard, Eddie Cochrane, Replacements) as well as originals which were mainly written by John Paul Trash.  Bore Dumb Blues is a great tune that really showcases the band's many styles and influences.  Today, John Paul Trash is carrying the torch and has started a MySpace page dedicated to the band's memory.  He's also uploaded some cool live footage of the band.  You can follow him at http://www.myspace.com/107451081.  At the time of this blog, there were no used copies of the band's self titled debut available for sale.  You can hear the song, Bore Dumb Blues, on You Tube (http://www.youtube.com/watch?v=LxI4IABOjMg).  Thanks for reading and enjoy!

You Tube Message From : JP Trash


TheAbsoluteWhores
his is hilarious. and such a walk/stumble﻿ down memory lane. ill have to let the sickies know there's a cover of one of their songs on here.
TheAbsoluteWhores
The Sickies never got around to﻿ recording it which is too bad. They were a punk band from the Cambridge area that we met in the late 70s and they were great. They had rehearsal spaces Berkley Street and out on Kingston Road and hosted some very large and boisterous parties.
The singer - Axel Thumm - went on to play in The Dice, Shock Army, Atomic Thumm, - pronounced tomb- and Raw Dog, Oxfart Marphalogna became the singer for Mr. Science and often performed with the Absolute Whores and created some of the funnier stage props that we used. Gerald McGuinness was the first bass player for the Whores
Posted by Raised On Canadian Radio at 6:10 PM No comments: