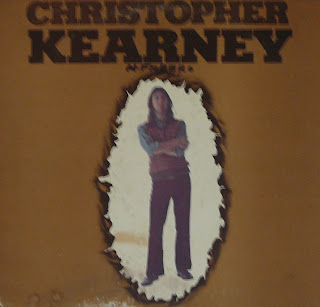 "Loosen up your hold on me babe.  Let out the reins and let me run.  Loosen up your hold on me child.  I'm not the one to sing your song."  Christopher Kearney is a singer songwriter from Toronto, Ontario.  Christopher would relocate to the US West Coast in the late sixties and become acquainted with Gordon Lightfoot.  It was this connection that landed him his deal with Capital Records in the 1970's.  Christopher would release his self titled debut in 1972 and the lead off single was Loosen Up.  Known more in folk circles, this song is a countrified blues song which was a bit of a crossover song for folk rock at the time.  If you like Grateful Dead and perhaps CCR, you should enjoy this track.  The song did well in Canada and landed him some opening gigs for well-known artists like Anne Murray at the time.  He even represented Canada at an international song festival in Brazil with the Stampeders.  He would go on to release two more albums in the seventies as a solo artist, his last in 1975.  Christopher would resurface in a band known as China in the early eighties with Canadian, Danny McBride (former guitarist with Chris DeBurgh).  He still resides on the west coast, specifically, San Diego.  He collaborated on a song for the relief effort in Bosnia during the nineties.  The project featured a number of well known Canadian artists like Molly Johnson, Rik Emmett and Tom Cochrane.  The self titled debut is not an easy find these days and is likely only available on vinyl.  At the time of this blog, there were 3 copies for sale on Ebay between $20 and $30.  You can follow Christopher on his MySpace page at http://www.myspace.com/christopherjkearney.  He still writes and records and released another solo album in 2008.  You can hear the song, Loosen Up, on You Tube (http://www.youtube.com/watch?v=dFSzrBeD0OY).  As always, you can hear this song as well as others that I blog about each day on Live 365 (www.live365.com/stations/raisedoncndnradio).  Thanks for reading and enjoy!
Posted by Raised On Canadian Radio at 6:19 PM 1 comment: