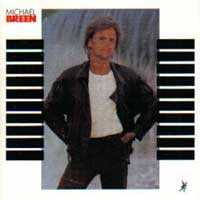 Michael Breen was a singer from Quebec who released his self titled debut in 1987 with Alert Records.  He was discovered by the label through an East Coast Talent Contest that he subsequently won.  Michael was actually a francophone who teamed up with English lyricists so that his music would have wider appeal.  With respect to the lead off track and single, Rain, from this album.  He teamed with a young Sass Jordan.  She, of course, would go on to establish a successful career as a solo artist.  The album was produced by Pierre Bazinet who was a well known Montreal based producer that had worked with artists like Luba and Celine Dion.  This particular track got quite a bit of airplay in Canada for Michael.  He just belts that chorus out with great energy.  There isn't much in the way of information on Michael since this release.  I don't believe he recorded another album after this.  His name does come up in the credits of the McGarrigle sisters' 1990 release, Heartbeats Accelerating, where he added guitar work to the album.  There also appears to be another country artist in the US that shares his name and is still recording.  The album is a difficult find these days.  At the time of this blog, there were vinyl copies of the Rain single and the self titled debut album on Ebay ranging from $4 to $7.  You can watch the original video for the song, Rain, on You Tube (http://www.youtube.com/watch?v=buur6KcnO8E).  As always, you can hear this song as well as others that I blog about each day on Live 365 (http://www.live365.com/stations/raisedoncndnradio).  Thanks for reading and enjoy!
Posted by Raised On Canadian Radio at 12:29 PM No comments: