Artist: Troiano, Album: Fret Fever, Song: Give Me A Chance 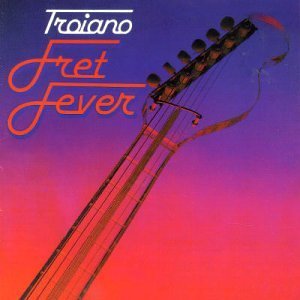 "Give me a chance, be what I want to be.  Give me a chance, see what I want to see.  Give me a chance, try things my own way.  What have you got to lose now, if I'm wrong I'll have to pay."  Domenic Troiano was a Toronto guitarist known for his work as a solo artist as well as a member of many bands throughout the sixties and seventies.  He started out with a number of r&b acts in the mid sixties, most notably, Mandala and Bush.  When the seventies rolled around he replaced Joe Walsh in the James Gang, did some time with the Guess Who and released a slew of solo albums.  Fret Fever was his release in 1979 which featured the song, We All Need Love.  This song became a disco smash hit for Domenic and likely his most commercially successful single.  However, a little deeper in to Side 1 on this album reveals the dirtiest little funk song by any Canadian to date.  Give Me A Chance sounds like something from the Ohio Players.  It is just over two minutes of grooving.  Troiano's band featured well known producer David Tyson (Jude Cole, Arrows) on keys, Bob Wilson on bass and Paul DeLong (Kim Mitchell) on drums.  Domenic would continue to write and record up until his death in 2005.  Domenic Troiano is a member of the Canadian Music Hall Of Fame and deservedly so.  I can't think of too many artists that have produced such great work with so many different bands.  Randy Bachman comes to mind and sadly, Domenic never really had the same commercial success as him.  He remains one of our country's most talented and prolific artists that a lot of Canadians might not be aware of.  There is a great website documenting the life and times of Domenic at http://www.troianomusic.com/.  At the time of this blog, there were vinyl copies of Fret Fever for sale on Ebay trading between $5 and $20.  You can hear the song, Give Me A Chance, on You Tube (http://www.youtube.com/watch?v=zr9Mq7GuyTU).  As always, you can hear this song as well as others that I blog about on Live 365 (http://www.live365.com/stations/raisedoncndnradio).  Thanks for reading and enjoy!
Posted by Raised On Canadian Radio at 7:04 PM No comments: