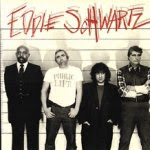 "She was a special girl.  She meant the world to me and I gave her everything."  Eddie Schwartz is a singer songwriter from Toronto who got his start playing guitar in a band called Charity Brown during the seventies.  He released his first album in 1980.  He wrote some huge international hits like Pat Benatar's Hit Me With Your Best Shot and Paul Carrack's Don't Shed A Tear.  His songs have been recorded by everyone from Joe Cocker to Meatloaf.  He released three studio albums between 1980 and 1983.  His last was this album, Public Life, which included the single, Special Girl.  It is an eighties gem that was covered a year later by the band, America.  Rick Derringer plays guitar on this album.  Eddie would go on to focus more on songwriting and production following this release and to date, he has to be the most recognized and successful Canadian songwriter.  The song, Special Girl, was included on some compilations in later years.  The first is entitled, Tour De Schwartz and most recently, All Our Tomorrows.  All Our Tomorrows is available for download on Itunes.  You can follow Eddie at http://www.myspace.com/eddieschwartz.  You can watch the video for the song, Special Girl, on You Tube (http://www.youtube.com/watch?v=s4627ZUHV6M).  Thanks for reading and enjoy!
Posted by Raised On Canadian Radio at 7:03 PM No comments: