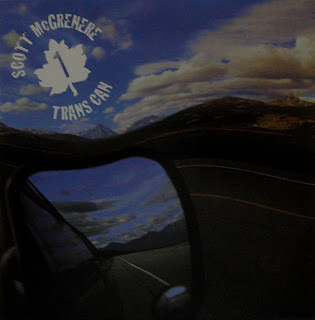 "Well she's the queen of my every night.  She tucks me in so sweet and Lord so tight.  But she's just a sound carried on a wave and my soul is free for her to save."  Scott McGrenere is a singer songwriter from Toronto, Ontario.  He began his career in the mid nineties releasing his indie debut called, Greatest Hits.  He followed that up with a second release in 1996, called, Armoured which continued in the vein of alternative country.  His final release was in 1997, entitled, Trans Can.  The album was inspired by his trip across Canada along the Trans Canada Highway and of course, the places he visited in between.  The album was recorded in Vancouver and mixed in Toronto and has some wonderful tracks on it like this one called Radio Love.  Unfortunately, there isn't much on Scott.  He has a MySpace page but it doesn't appear to be updated with any new shows or events.  His albums are also very hard to find and likely had limited pressings.  I couldn't find any copies of Trans Can available at the time of this blog.  However, he does have some great tracks on his MySpace page that you can listen to.  You can follow him at http://www.myspace.com/scottmcgrenere.  You can also hear the song, Radio Love, on You Tube (http://www.youtube.com/watch?v=6P2Vk_-37cY).  Thanks for reading and enjoy!

From: SCOTT MCGRENERE
Subject: RE:
Hi there
I think your site's a great idea. I'm back in toronto now and will be playing at the Cloak and Dagger Sun Feb 6th. Also working on a bandzooge site and updating myspace and cbcradio3 content. Keep pushing Canadian music.
Scott

Posted by Raised On Canadian Radio at 7:07 PM 3 comments: