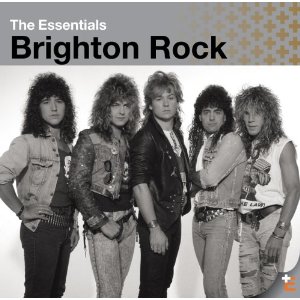 "Now I'm waiting for your answer babe.  Yes I'm hangin' high and dry.  Time is running out on me.  Yes I'm hangin' high and dry."  Brighton Rock were a metal band from Ontario.  They were winners of the Q107 Homegrown contest and signed by WEA.  They released their major label debut in 1986.  The band's ballads seemed to get good radio play such as Can't Wait For The Night from their debut and One More Try from this album, Take A Deep Breath.  The song, Hangin' High 'N' Dry, had a bit more rock to it.  Keyboards were still prominent but the tempo was faster.  Take A Deep Breath garnered them a Juno nomination for most promising band.  They would go on to release one more album in 1991 which was nominated for Hard Rock Album Of The Year, but they lost out to Rush.  The band then broke up.  They were Johnny Rogers, Greg Fraser, Gerald McGhee, Mark Cavarzan and Stevie Skreebs.  Greg Fraser joined Helix in 1992 and later he and Skreebs formed the band Fraze Gang. The band would reunite as Brighton Rock in 2002 to release a live album and in 2006, an Essentials compilation was released of their hits.  Today the band has been reforming to play the odd gig and you can follow them at http://www.brightonrock.ca/.  Take A Deep Breath is no longer available and at the time of this blog, there were copies trading on Amazon and Ebay between $15 and $60.  Your best bet is to order the Essentials compilation that is for sale on Amazon for $15.  You can watch the video for the song, Hangin' High 'N' Dry, on You Tube (http://www.youtube.com/watch?v=4EgpkJfRHEY).  Thanks for reading and enjoy!
Posted by Raised On Canadian Radio at 12:01 PM No comments: