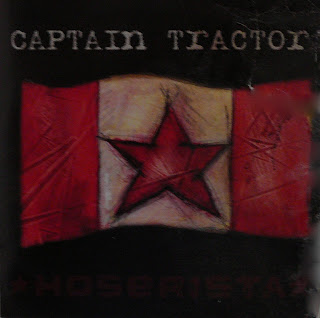 "The last time I saw her was from the backseat of a car.  I traded in Whyte Avenue for a harder set of bars."  Captain Tractor are a country rock band from Edmonton, Alberta.  They started out in the early nineties touring constantly through Canada and the U.S..  They released their debut in 1994 and established a loyal audience which they continued to build upon year after year.  They've won numerous awards within their home province, toured parts of Europe and have released 7 albums to date.  The most recent in 2005.  Their sound can at times be very traditional as some of their biggest hits have been renditions of Celtic folk classics.  Hoserista was released in 2000 and has more of a gritty country appeal to it.  It was produced by Luke Doucet and was sold as a companion disc to a 5 CD box set sharing the same name.  Each CD was a combination of live recordings, demos, new songs etc. that were hand picked by each member.  One of the stand-out tracks on this release is the song, City Of Champions, which chronicles a story told to the band one night about love and the loss of love in the city of Edmonton.  It's a sad but great song.  The band is still gigging, mainly in Alberta these days.  They have a very entertaining biography on their website which is full of great stories from their years on the road.  You can follow them at http://www.captaintractor.com/.  Most of their releases are available for download on Itunes except this one.  You can purchase it at Maple Music.com.  You can hear the song, City Of Champions, on You Tube (http://www.youtube.com/watch?v=7xqrIfn54oY).  Thanks for reading and enjoy!

Posted by Raised On Canadian Radio at 5:51 PM 1 comment: