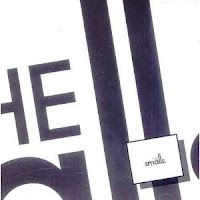 The Smalls were Mike Caldwell, Corb Lund, Dug Bevans and Terry Johnson.  They were formed in Edmonton but the guys were from small towns throughout Northern Alberta.  They formed in 1990 releasing their self-titled debut which included a cover of the Pretender's hit, Middle of the Road.  It's a simple, straight up punk rendition of the song that is reminiscent of the style of punk played by the Ramones.  What I like about the Smalls is that they did everything their way and weren't afraid of what people thought.  Their country and rock influences came right through in their music yet it sounded so original.  The band even covered Natural Woman (worth checking out on their last album, My Dear Little Angle).  By 1999, they had four releases and two years later they played their last show.  Corb Lund has since gone on as a country-roots solo artist.  This album is available for download on Itunes.  It is also available for purchase on Amazon.ca but not Amazon.com.  You can hear the cover on You Tube (http://www.youtube.com/watch?v=SFBA_Vn309I).  Thanks for reading and enjoy!
Posted by Raised On Canadian Radio at 6:02 PM No comments: