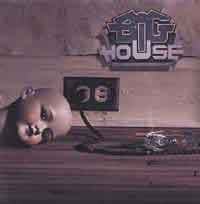 "Ooh come along.  I got a dollar in my pocket for you.  Ooh come along.  You can have it if you want it."  Big House were a rock band from Edmonton, Alberta.  They were Jan Ek, K.B. Broc, Craig Beakhouse and Sjor Throndson.  They released an indie EP entitled, Pretty Things, on the Boomtown Music label in California.  That led to a distribution deal with BMG and the release of their self titled debut in 1991.  The band got some decent airplay for this particular song.  This track was right in line with where heavy metal was going at the time.  A rough and trashy sound more like Guns n' Roses as opposed to the slick production of bands like Def Leppard.  Guns n' Roses' Appetite For Destruction was almost 5 years old at this point though and Nirvana's Nevermind was released this same year.  So like most metal acts around that time, they failed to produce another album.  What's interesting about this band though, is that two of their core members actually came from the punk scene.  Ek and Throndson were in a punk band called Down Syndrome before joining Big House.  It's just unfortunate they didn't continue recording to see how their sound might have evolved.  The self titled debut is not widely available.  At the time of this blog, there were used copies for sale on Amazon ranging between $5 and $240.  You should also not confuse this band with a country band that goes by this same name.  You can hear the song, Dollar In My Pocket (Pretty Things) on You Tube (http://www.youtube.com/watch?v=SOfIc-4kCjQ).  As always, you can hear this song as well as others that I blog about each day on Live 365 (http://www.live365.com/stations/raisedoncndnradio).  Thanks for reading and enjoy!
Posted by Raised On Canadian Radio at 6:02 PM No comments: