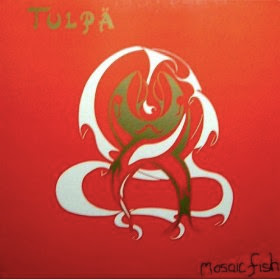 Tulpa were an art rock/punk band from Toronto.  They formed in 1982 and were originally called, Private Lives, before discovering another band shared that name.  They cut their teeth on the Toronto club circuit and attracted a lot of attention for their wild stage presence.  They were brothers, Chris and John Bottomley (see blog 10/7/10) along with drummer, Sev Micron.  The guys shopped their debut to labels in England and landed a deal with Midnight Records for this release, entitled, Mosaic Fish, in 1984.  The band played a number of shows at the legendary CBGB's bar in New York and opened for such artists as Living Color, Michelle Shocked and while in Canada, The Payolas.  This was their only studio release yet they did release a live album of material recorded at CBGB's in 1986.  The band would eventually break up and brothers Chris and John would go on to release albums as solo artists.  John would eventually win a Juno for one of his solo recordings during the nineties.  Tulpa did reform back in 2009 and 2010 to play some shows but in April of this past year, John had passed away sadly.  Mosaic Fish is a difficult find today.  There was some talk about it being re-released on CD but I'm not sure if that ever happened.  At the time of this blog, there were vinyl copies trading on Discogs between $10 and $15.  If you are a U.S. resident, the album is also available for MP3 download only at Amazon.com.  The Cage, is a great track from this release and you can check it out on You Tube(http://www.youtube.com/watch?v=es_wbC2T9aM).  You can also see some of the early interviews with the band that helped launch them in Canada (http://www.youtube.com/watch?v=LVSmj2ZYvFo, http://www.youtube.com/watch?v=qUaWXwHhDBQ&feature=related).  Thanks for reading and enjoy!
Posted by Raised On Canadian Radio at 6:55 PM 1 comment: