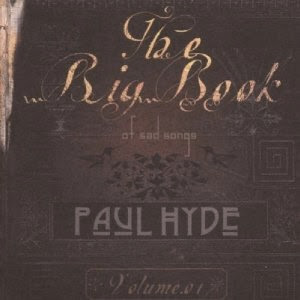 "Of all the things I lost this year.  I miss my mind the most."  Paul Hyde needs no introduction to Canadian listeners.  He was lead singer of a very successful band called the Payolas in the 80's.  His musical partner in that band as well as later projects was Bob Rock.  Paul was actually born in England but came over to Canada as a teen.  His work with the Payolas began in the late seventies on the West Coast.  Since the breakup of the band, he has recorded five solo albums.  His most recent was released in 2009.  Big Book Of Sad Songs Vol.1 was released on an indie label called Bongo Beat in 2002.  According to the liner notes which are quite funny on this album, the song, I Miss My Mind The Most, was inspired by a bumper sticker.  It's a beautiful sad song that makes you want to cry in your beer.  Russell Crowe must have thought so too because he recently recorded it!  The album is available on Itunes, Amazon and CDBaby.  You can watch the video for the song on You Tube (http://www.youtube.com/watch?v=ELWGkPBWPc4).  Thanks for reading and enjoy!

Posted by Raised On Canadian Radio at 5:46 PM